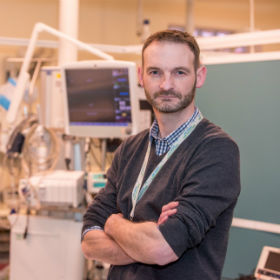 Seven years ago this week, Nottingham’s Queen’s Medical Centre (QMC) became the East Midlands Major Trauma Centre, and since then we’ve treated and cared for 11,020 patients and saved 645 lives.

Nottingham’s Major Trauma Centre covers a catchment area of four million, is the busiest in the country and has the strongest clinical outcomes nationally.

Based at QMC, it is one of a national network of specialist centres which concentrate expertise and resources to give the best possible care, including intensive care and brain surgery.

Jason Swift is one of the 645 lives saved and was admitted to our Major Trauma Centre in May 2012. Jason, from Derbyshire, was out riding his motorbike with his brother when he tragically had a life-changing accident. QMC had only been titled the Major Trauma Centre for four weeks prior to Jason’s admission, making him one of the centre’s first patients. He spent five months in hospital, with most of his time at Nottingham City Hospital’s Linden Lodge for neuro-rehabilitation. When he was admitted to Linden Lodge, he was unable to walk, talk or feed himself. He left walking and talking independently, although due to a life limiting nerve injury he took the brave decision to amputate his right arm in 2014.

This has not stopped Jason fulfilling an active lifestyle and travelling the world. He has had great support from family and friends throughout his recovery. Jason now plays for West Bromwich Amputee Football Club, he is working and his family have starting growing as they are now expecting their first baby.

And Tom Holden, from Surrey, says he owes his life to our Major Trauma Centre. In May 2017, Tom was hit by a car on a 40mph road on his journey home from Loughborough University. At the time of his injury, he was in his second year of university and taking part in competitive middle-distance running at both a national and international level. Tom suffered an extensive brain injury and a fractured jaw, and was in hospitals for seven months, including one month in Critical Care.

Tom said: “I was unconscious the whole time I was on Critical Care, but I have heard numerous times that the staff were incredible. The trauma team followed my care through from Critical Care to Ward C30 and initiated further rehabilitation. They were also responsible for the removal of my tracheostomy tube and the healing of that wound. I have learnt to walk and talk again, and I was discharged on 15 December 2017 (just in time for Christmas) and have since returned to university. I have a long road to recovery ahead of me, but I will be eternally grateful for the amazing care I received that gave me a head start on this journey.”

Adam Brooks, Clinical Director for the East Midlands Major Trauma Centre, said: “Nottingham should be very proud of its Major Trauma Centre. In the space of just seven years, we have become a centre of excellence for major trauma with a national reputation. Centralising expertise in specialist Major Trauma Centres such as QMC is savings hundreds of lives every year, and in Nottingham has saved 645 lives since 2012. We are very fortunate to have many of the country’s leading clinical experts working at our hospitals in Nottingham, which contributes to the city having the strongest clinical outcomes in the country for major trauma.

"Major Trauma Centres deal with the victims of stabbings and shootings as well as car and motorbike accidents and falls. All major cities have regrettably seen significant increases in knife crime and trauma centres such as Nottingham are saving many more of these victims than ever before thanks to our expertise and quicker treatment. We are working very closely with our partners, including Nottinghamshire Police and Nottingham City Council to reduce knife crime through education, including through the excellent input from the Redthread Charity, who support young people avoid becoming victims of violent crime again.”

Experts at NUH are leading the development of a new National Rehabilitation Centre in the East Midlands, at Stanford Hall Rehabilitation Estate, in Loughborough. The intention is that a new rehabilitation clinical model will deliver improved outcomes, and help people to return to functional lives. Up to 800 patients in the East Midlands could benefit from this new facility a year. The Defence part of the National Rehabilitation Centre opened mid-2018 following a handover ceremony, and deals with amputees and complex brain injuries. The National development is a second centre for civilians recuperating from major trauma injuries.

Adam added: “We are constantly working to improve the major trauma pathway for our patients and their families and a priority in the years to come is a greater focus on recovery and rehabilitation of major trauma patients so that we can get more patients back to work and living as normal a life as possible, as quickly as possible, after their accidents.

“The National Rehabilitation Centre is an incredibly exciting project for the NHS, as this facility has the potential to very significantly improve inpatient rehabilitation services and clinical outcomes for patients in Nottingham and across the East Midlands and create a world-leading centre. The National centre will deliver rehabilitation programmes to patients who require rehabilitation after a period of illness or injury and have completed their acute hospital stay, including major trauma patients.”

The NHS reorganisation created 27 designated Major Trauma Centres, with the London network launched in April 2010 and networks across the rest of the country operating since April 2012