Want to know what it's like to volunteer at NUH? Read the profiles below from current volunteers here at NUH. 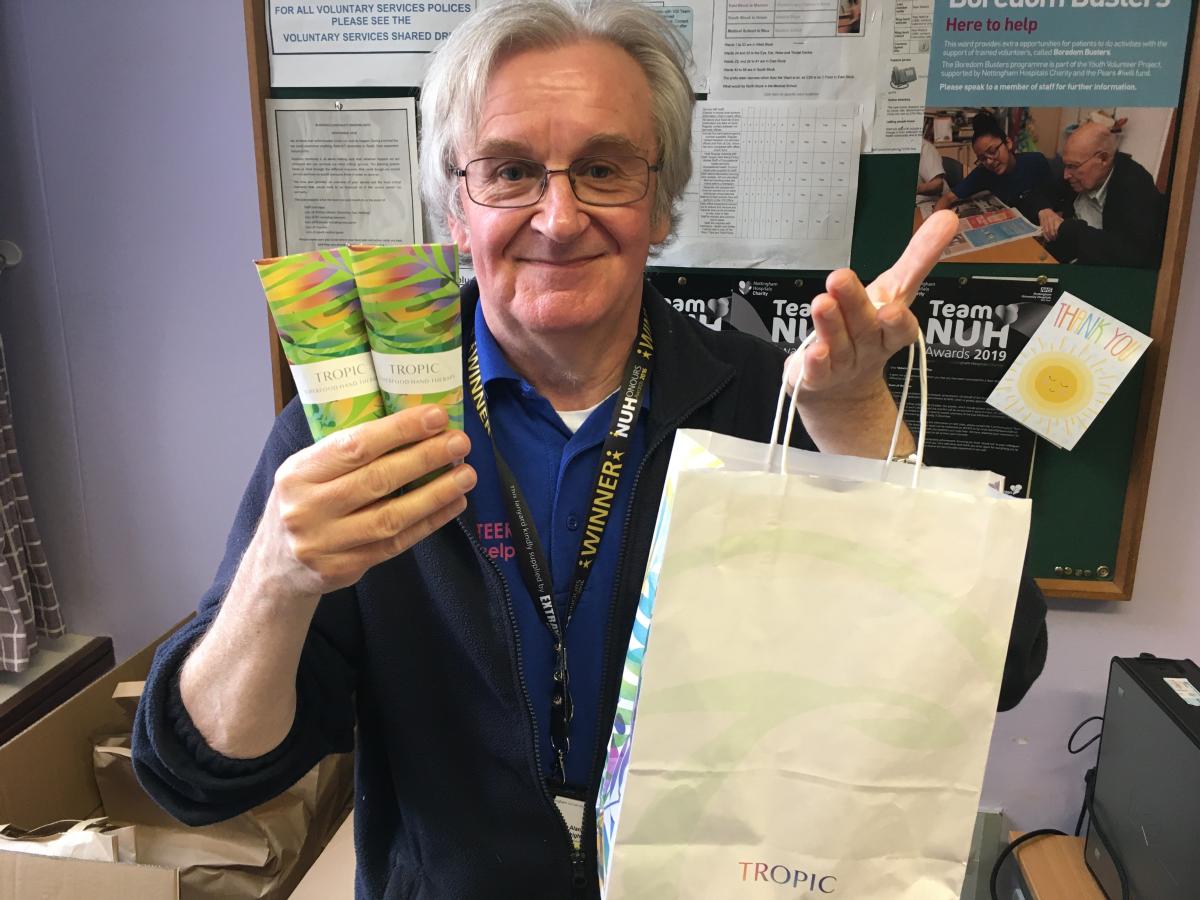 Alan was born in Nottingham, and he and his family have always lived in the city, attending schools in Clifton, Wollaton, and the Meadows.

After completing education, Alan embarked on a 41 year career, mainly working in finance, the highlight being working with Crosland Filters, a manufacturing and retail company based in Bilborough between 1985 and 2005, undertaking various roles ,  which allowed him to develop his understanding of business.

Alan’s last employment was at Boots UK Ltd between   2007 and 2016, in the Credit Control department, dealing with various sectors within the Boots business, but mainly dealing with a number of Hospital Trusts within the NHS.

In 2005, Alan decided to apply for a voluntary role at NUH, as he enjoys helping people, and was pleased to be accepted as an evening Ward Volunteer at the QMC , being assigned to Ward D58, as well as doing voluntary work within the bereavement centre.

At the end of 2005, Alan was made redundant from Crosland Filters, and was then happy to secure the post of Ward Receptionist on D58 spending 10 months in that role before moving to another role outside of the trust.

When Alan left his role on D58, he opted to move to another ward within the trust and began working as an evening volunteer on F20 which he did until 2016, answering the telephone, and assisting the staff with patient refreshments.

After retiring from paid employment in 2016, Alan decided to spend more time volunteering within the trust, starting as a tram volunteer, and was delighted to be part of the team that won Volunteer of the Year at the 2016 NUH Honours Awards.

Since 2016, Alan has also worked within the Fracture Clinic, the Emergency Department and the Discharge Lounge, as the trust has allowed him to diversify his roles within the hospital, and particularly enjoys training new volunteers in their roles when requested.

In 2018 Alan joined the Patient Participation Group, a group dedicated to enhancing the patient and carers experience within the trust and the community, and thoroughly enjoys working alongside his friends on this successful and hard working group.

The Covid 19 pandemic has been challenging for everyone within the trust, including the volunteers who have been able to continue with restricted roles.  Alan is very happy to work with such a great volunteers teams , some who have become personal friends, and who seen their roles changed in order to meet trust requirements as requested.

In his spare time, Alan enjoys watching many sports, having supported Notts County since the mid-60s.

He also enjoys watching cricket at Trent Bridge, and for many years played in competitive ten pin bowling leagues in Nottingham and the North.

Alan is a very dedicated volunteer and the Trust is extremely fortunate to such a polite, selfless volunteer who will willing to help all he comes into contact with. 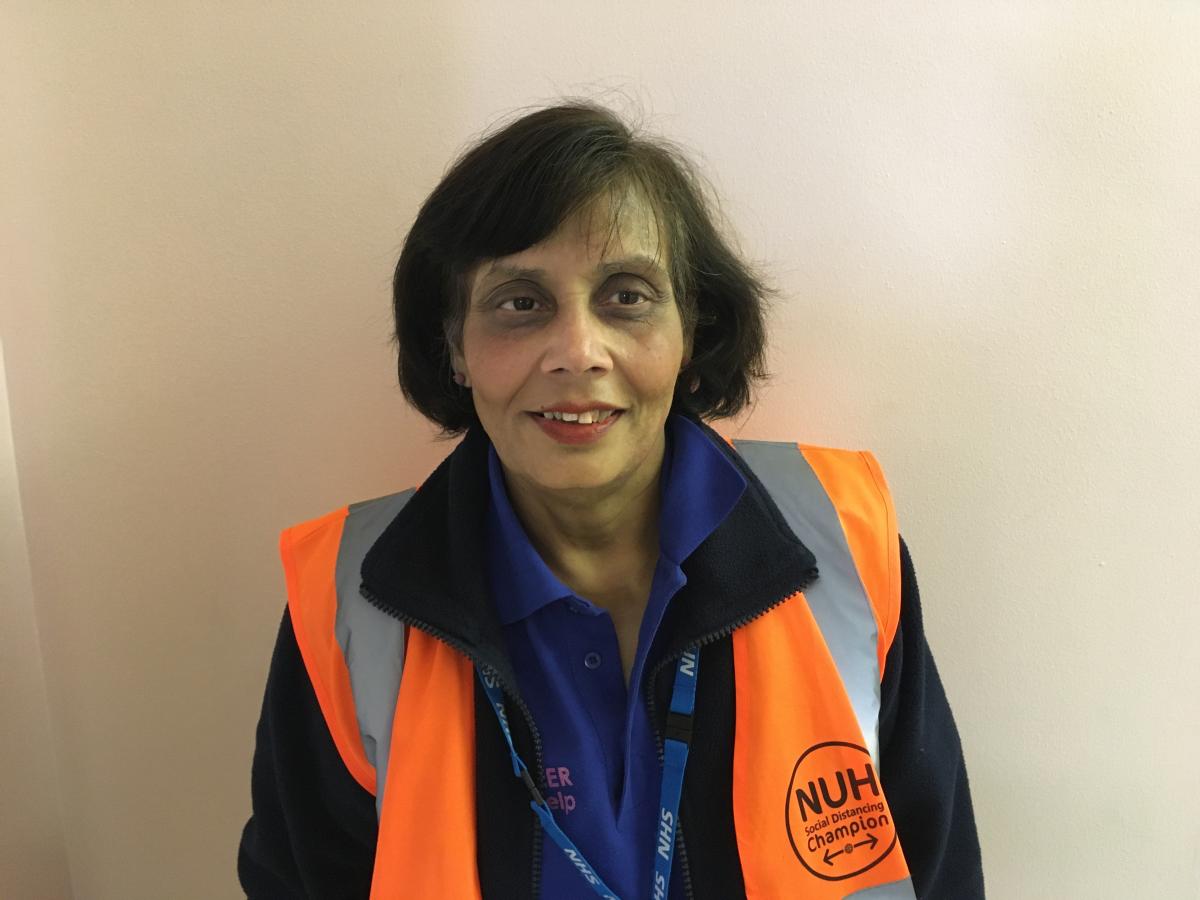 Born in Dar-es-salaam, Tanzania and came to England in 1976 as British Subject for further Education with her Family. She had travelled with her Parents as her Father was in business. She met her husband when she was travelling in India, fell in Love and got married after five years and had a family.

Jayshree achieved Bachelor of Science and Math being her strong subject. But the fate took her in different direction and took Employment as a Cashier in England. She excelled into Management.

Jayshree has a keen mind and has various hobbies and interests with a love for Sport, Reading and Cooking. In Jayshree’s words  “I like to cook anything and everything vegetarian for my family to enjoy.” Cooking Dishes from across the World is both challenging and rewarding.

Why Jayshree became a Volunteer:

Jayshree has faced an unfortunate near Death Experience and faced many tribulations with her health, which inspired Jayshree to become a Hospital Volunteer. She joined The Voluntary Service with NUH, NHS, UK via “Be The Help Force “ promoted by Daily Mail in Year 2019.

Jayshree complements our Volunteer Team well and is extremely reliable and helpful. We are immensely fortunate to have so many excellent Volunteers like Jayshree and the Team 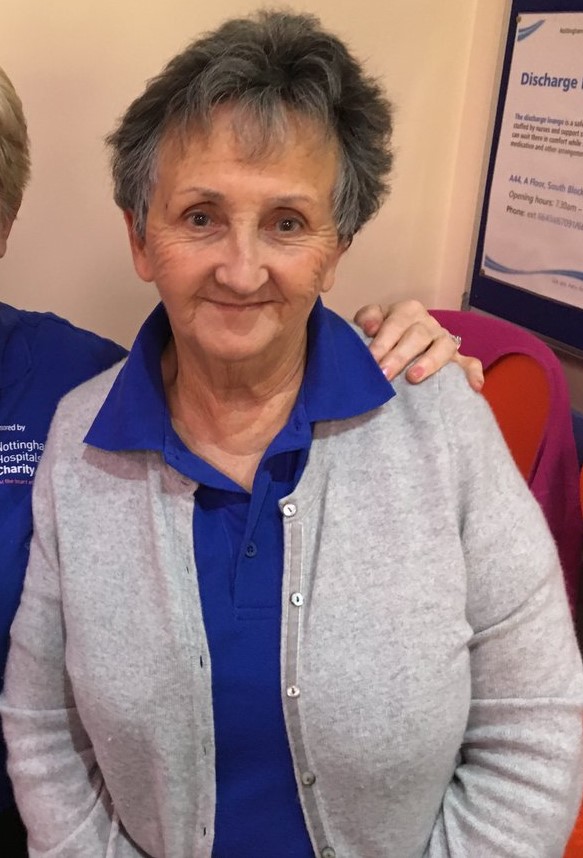 I came into this world before the NHS was founded in a nursing home in Acocks Green Birmingham.

I had one brother David who was born 2 years later, unfortunately he was born with a hair lip and cleft palette. I have many memories of Birmingham children’s hospital where David had numerous appointments over the years.

We continued to live in Birmingham,  money was short in those days but we never went without and they were very happy times it was good to be a teenager in the rock and roll years.

I married in 1963 and moved to Grantham Lincolnshire, where three  years later our daughter Sarah was born. I had several jobs from cleaning to working in the local building society.

In 1977 I started working at the local police station , to gain promotion I enrolled in a two year management course when in my fifties, which I completed by the skin of my teeth, bearing in mind I left school at 15 with no qualifications . I finally retired after 30 very happy years.

I love to travel and over the past 16 years with either my daughter or friends I have been east as far as Australia and west to Hawaii,  my favourites being Canadian rockies and South Africa.

I moved to Beeston Notts in 2007 when I retired as my daughter was living here and I had no longer any ties in Grantham.  I started to look for volunteer opportunities to get out and about and enjoy my retirement, while also keeping fit and active. I volunteered in many area’s  including citizens advice, help running a friendship group for female  refugee/ asylum , seekers, food bank and finally the QMC responding to a request for volunteers  on the new Tram platform , this was before the bridge into the hospital was built.  Following this I moved to the ENT entrance meet and greet, very rewarding being able to give visitors help with directions and support.

In March 2020, due to COVID-19 restrictions I was no longer able to volunteer for a time inside the buildings. I managed to keep busy in lockdown helping with the garden at QMC, working at the friends of QMC charity shop, where I also secured funding to buy 2 picnic tables for the garden.

I returned to internal volunteering at QMC on the 4th June 2021 to a completely new role in children’s clinic east,  “queue managing” a bit of a challenge but I love it and all members of the department have been so kind and helpful.

I truly love helping others and hope to continue my volunteering for many, many years to come.