Why we take part in research

Why we take part in research

Some of the people who have taken part in research at NUH explain why they decided to get involved and what their involvement means to them.

A Research study is a positive step

“If you have a particular connection with an illness, it can feel like there is nothing you can do, whereas enrolling in a research study is a positive step. Alzheimer’s is a very difficult disease to deal with.”

Alzheimer’s is a terrible way to lose a family member; I wanted to help 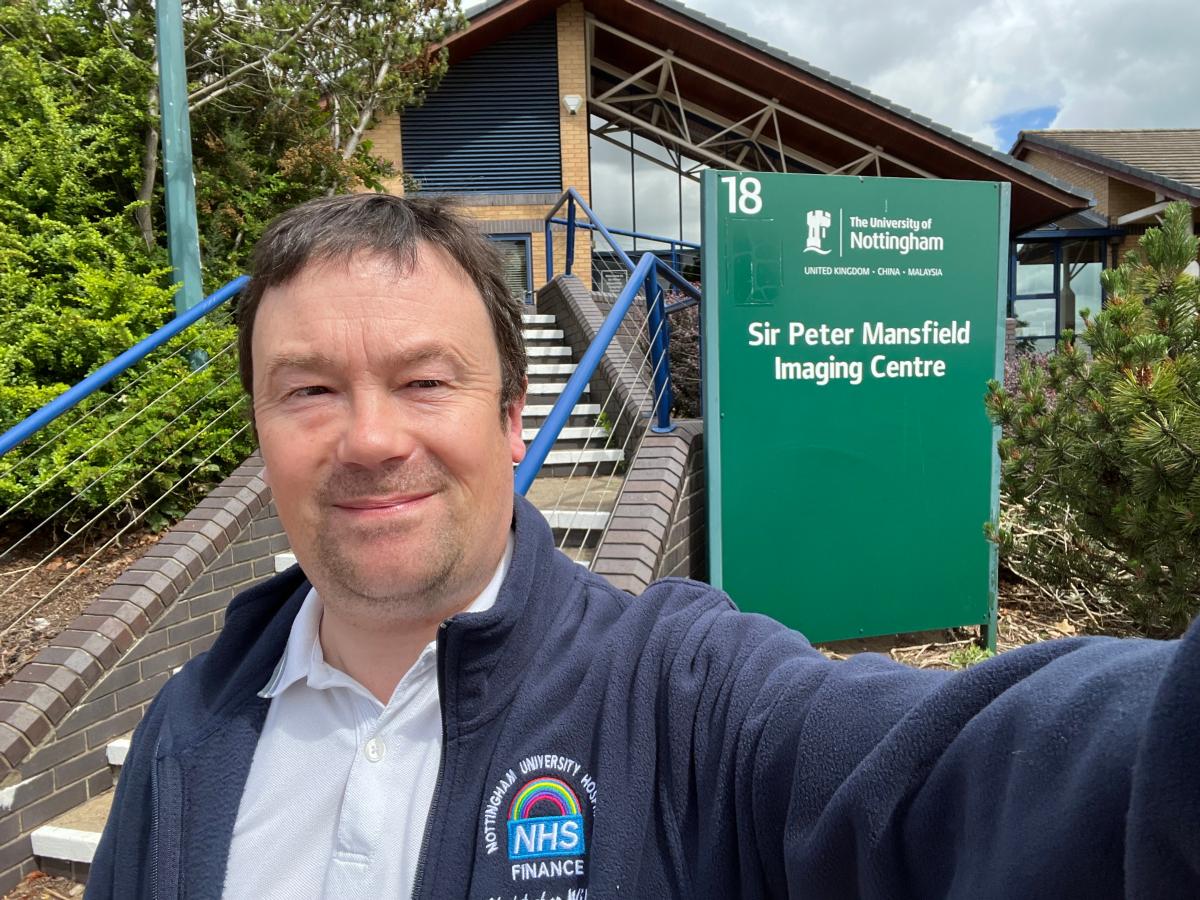 For Chris Wilkes (pictured), who works in NUH’s Finance and Procurement Team as a lead accountant, Alzheimer’s disease has a personal resonance.

So, when Chris saw that NUH was leading the UK arm of an international research study investigating possible links between COVID-19 and Alzheimer’s, he was keen to help the researchers.

“I thought; I’m going to put myself forward for this, anything we can do to assist research into the possible causes of Alzheimer’s has got to be a good thing.”

After reading about the £2.8 million US-led study in the Trust’s internal communications, he approached the research team, led in Nottingham by Consultant Neurologist Dr Akram Hosseini.

Chris - who leads a finance team that supports NUH’s work on its capital programme and business cases, including the case for the new National Rehabilitation Centre - travelled to the Sir Peter Mansfield Imaging Centre at the Univesrity of Nottingham for an MRI scan.

The research study he took part in is funded by the United States Institutes of Health/National Institute of Ageing. It is the first in the world to explore changes in the brain that may cause memory loss following Coronavirus infection.

To do this, researchers use a 7 Tesla (7T) MRI scanner – the most powerful MRI machines in the UK – to look at participants’ brain structures.

Chris said: “If you have not had an MRI scan before, it isn’t painful, or uncomfortable, but it is a different sensation.

“What I did, however, bore no comparison to what people who are going through Alzheimer’s experience and the challenges they face.”

Afterwards, he posted about his experience on Facebook, to encourage others to consider joining the 7T study.

Following his MRI scan, which lasted around an hour, Chris had another session with researchers answering questionnaires, including questions on exercise and dietary habits.

Researchers also assess the well-being and mental health of participants and conduct neurological tests, as well as taking blood samples. For Chris, participation in the study took less than three hours in total.

“If you have a particular connection with an illness, it can feel like there is nothing you can do, whereas enrolling in a research study is a positive step. Alzheimer’s is a very difficult disease to deal with.”

Chris praised the “very caring” research team for their support during the study, which made participation easy.

Ian Pointer, a Royal Mail postman in Nottinghamshire, was hospitalised with COVID-19 in March 2020. He was rushed to the Queen’s Medical Centre by ambulance after struggling to breathe at home and was ventilated and placed in an induced coma for four weeks, during which time his kidneys failed and he developed septicaemia.

Ian said: “Things got very real, very quickly. The full details of what went on and how they managed to keep me going is still a mystery to me, but I am deeply grateful to our fantastic doctors and nurses for their dedication and commitment, I will be forever grateful.”

After a long and difficult battle with the virus Ian returned home, but has continued to suffer Long Covid symptoms such as fatigue, lethargy and mood swings.

Ian explained: “When I was discharged from hospital I thought I was over the worst of it and I could get back to normal, but far from it. The loss of physical fitness is one thing, but the mental health issues, mood swings, the inability to let small things go, the lack of interest in things – these are things that are new to me.”

Ian’s health is slowly improving, 11 months on from contracting COVID-19, but his fitness and mental wellbeing have still not returned to their previous state.

He said: “I can run upstairs now without spending an hour sitting down afterwards, but I think it’s the lack of get-up-and-go that I have noticed, I just feel like doing nothing.”

While Ian was in hospital, his colleagues at Royal Mail raised money for Nottingham Hospitals Charity, to support the NHS staff who were caring for patients like Ian.

He is now backing the Charity’s Long Covid Research Appeal, and says: “I think the more information we get, the better we will understand and be able to help Covid sufferers who may experience different symptoms and needs. Currently there’s a broad-brush approach when dealing with Covid suffers, because we still don't truly understand it yet.”

The initial focus of the research in Nottingham will be on muscle fatigue and breathlessness, two of the most common and debilitating symptoms of Long Covid. The research will look at the effects of these symptoms and possible treatment options.

When Lynne Woodhouse first started to feel poorly in late March last year, she had never heard of Long Covid and had no idea how serious her health problems would become.

At the time it was “a bit of cough and a sore throat” thought Lynne, who lives in Daybrook and works for a major supermarket.

“I’m someone who never feels the cold, but I had to wear my jacket and so a colleague joked ‘gosh you must be ill!’’” recalls Lynne, aged 57. “I have mild COPD so I thought it must be to do with that.”

Little did she realise how rapidly she would deteriorate with COVID-19. Ultimately, Lynne spent six weeks being cared for by staff from Nottingham University Hospitals, including at Queen’s Medical Centre in an induced coma as a ventilator took over her breathing.

A few days after first feeling ill, Lynne had phoned in sick from work with a “blinding headache and terrible chills”.

Symptoms worsened over the coming days with Lynne - who has a son in his thirties and two grandchildren - experiencing vomiting and diarrhoea.

“Social media saved my life, as my daughter-in-law said there is something wrong, as they hadn’t seen me on Facebook for over 12 hours and that was not like me.”

Her son Matthew, who lives in South Wales, summoned family members in concern. They came to Lynne’s house where they needed to get a ladder to see through Lynn’s bedroom window.

COVID-19 had left Lynne delirious and unable to leave her bedroom. Her family summoned an ambulance crew who had to break in to her house and then rush Lynne to the QMC.

Shortly after arrival on the ward Lynne remembers: “A nurse gave me my phone and said ‘Do you need to ring anybody, as we need to put you to sleep’?

“So she dialled the numbers, and I managed to speak to my sister and my son…basically saying ‘Goodbye.’

“The doctors said this could go either way and the best chance for you to be treated is to put you into an induced coma. I was encouraged to say what I needed to…the ‘I love yous’.” Then that was it for about five weeks…”

On emerging from the coma, Lynne was moved to Nottingham City Hospital to begin the slow process of rehabilitation. Her time on the ventilator had been difficult, and while unconscious she had suffered from a series of vivid nightmares.

Although Lynne feels about 50% better than she was before COVID-19, she still struggles to put on long sleeve tops due to the lack of mobility of her arms, has insomnia and suffers from stress.

“I still cannot smell or taste and I haven’t slept under the covers of my bed as I feel trapped, as though I can't breathe, “ she added. “I also had a panic attack at the dentist. While they were  working in my mouth I couldn't swallow and breathe and I looked up to see staff in full PPE, which brought a few things back to me.”

As for the care Lynne received at Nottingham University Hospitals, she said it was, “fabulous". "I can’t thank staff enough for everything. They were so caring, nothing was too much trouble.”

Her rehabilitation started with physiotherapy enabling Lynne to sit up and then stand, but weeks of COVID-19 and ventilation had left her very weak, so regaining mobility was challenging.

On her return home in May, she needed oxygen from a portable machine and help from her son Matthew, who moved up from his home in South Wales to give her assistance with day-to-day life.

“It was as though I was an OAP or had had a stroke. Because I have lived on my own for 20 years and done everything for myself, it felt like I had totally lost my independence, which upset me.”

Last August, Professor Charlotte Bolton, Consultant in Respiratory Medicine at NUH and one of the researchers now leading studies in to Long Covid as part of the NIHR Nottingham Biomedical Research Centre, referred Lynne for further support including exercise classes. “It gave me some motivation and got me driving again. It was a shame the classes only lasted six weeks.”

While under NUH’s treatment, Lynne volunteered to enrol in the GenOMICC research study, which looks to better understand patients’ genetic suspectibility to COVID-19.

Why research is so important

She is supportive of more studies being carried out into COVID-19.

“Research is very important as it is about understanding the unknown. Everybody is different; everybody has a different set of symptoms, so we need to know how it affects people, and the categories of people that are affected.

“So we learn from it and we help in future and get it right first time. Back in March we didn’t know about COVID-19, and one of the doctors said to me ‘We are learning from people like you.”

Lynne is also backing the new Nottingham Hospitals Charity appeal to raise money for Long COVID research, “because only good can come out of it and people will be better off for it, and hopefully doctors and others involved in research will be better informed because of the findings”.

About the 7T study

The7T study is open to people who:

Please email a member of the study team for more information: