If you want to nominate one of our Nurses, Midwives or Student Nurses/Midwives or Nurse/Midwife led team for providing excellent care to you or a loved one you can nominate them for a DAISY Award.

Nominations can be made by completing and posting the nomination cards on wards and in public areas into the DAISY post boxes.

Or by completing a DAISY form.

The DAISY (Diseases Attacking the Immune System) Award is an international recognition program that honours and celebrates the skillful, compassionate care nurses & midwives provide every day. The DAISY Foundation was established by the family of J. Patrick Barnes after he died from complications of the auto-immune disease ITP in 1999. During his hospitalisation, they deeply appreciated the care and compassion shown to Patrick and his entire family. When he died, they felt compelled to say “thank you” to nurses in a very public way.

Each DAISY Award Honoree will be recognised at a public ceremony in their ward or department and will receive: a beautiful certificate, a DAISY Award pin, and a hand-carved stone sculpture entitled A Healer’s Touch.

By completing a DAISY Award nomination form, you consent for your personal data to be processed for the purpose of nominating a Nurse, Midwife, Student Nurse/Midwife or Nurse/Midwife led team for the DAISY Award.

We will only retain your personal data for as long as necessary to process the nomination.

We will protect your personal data against unauthorised or unlawful processing, and against accidental loss, destruction or damage, using appropriate technical or organisational measures.

If you no longer wish us to process your data for the nomination please contact DAISY.Awards@nuh.nhs.uk

The Barnes family visited us here at NUH on the 3rd July 2018. Many of you will recognise the Barnes family as the instigators of the Daisy award which they started after the death of their son and husband Patrick Barnes. Below is a selection of images from the family's visit.

What are the submission methods for the nominations?

We currently have a variety of different ways for you to send nominations. These include:

Can I nominate more than one person?

Can I nominate a whole team?

YES, we understand that it is difficult to choose only one or two individuals for an award and much of our care provided is achieved due to a team effort. Please specify which ward and/or team you are planning to nominate. You can specify names within this if you would like to.

Who can send in a nomination form?

Patients, Relatives, Visitors, Volunteers, Doctors, Colleagues, Students… you name it! Absolutely anyone can send in a nomination, just ensure that the individual you are nominating is eligible for the Award, as noted below. Please note any job titles not listed cannot be included in our monthly voting.

For nominations to other job titles not listed below, please send a nomination via Team NUH Awards .

What does the Nominee receive if they HAVE and HAVEN’T won?

If the nominee has the privilege of winning, a ceremony date will be organised in secret and the Honouree will not know of this until the day of the ceremony. They will receive:

If the nominee hasn’t been chosen as the monthly Honouree, they will still receive the following benefits:

I would love to attend the ceremony if my nominee wins – is this possible?

All nominators are provided an option to attend the ceremony if their nominee wins and our team will notify you for when this will be. These will appear as tick box options in both our tri-fold nomination forms and our electronic forms. Some wards may have older printed copies of the forms in their area, so please specify on the form if you would like to attend if your nominee wins.

How are the nomination forms processed and voted for?

When nominations are submitted, the DAISY and TULIP Admin team will type up the nominations sent within the month and the nominee’s details will then be anonymised before being sent for voting to our review panel, consisting of NUH Staff members. Our nomination review panel are then tasked with choosing a story of 1 RN Nominee, 1 RM Nominee and 1 TULIP Nominee to win per month.

Final votes are tallied and winners are announced to the panellists before ceremonies are organised.

Has my nomination story been voted for yet?

If this still hasn’t been actioned, kindly e-mail DAISY.Awards@nuh.nhs.uk with your request and we can check our database.

My Nominee still hasn’t received a nomination pin for their nomination – what happened?

Our eligibility criteria for a nomination pin is as follows:

If you are the nominee and believe you are to receive a nomination pin, please e-mail DAISY.Awards@nuh.nhs.uk with the approximate date you believe you were nominated and the full name of the nominator (if eligible).

Please further understand that if you haven’t received a nomination pin yet, it is likely due to limitations in inventory and delays in shipping orders from USA. However, you can still contact us on the e-mail addresses mentioned above, just to be on the safe side.

I have lost my nominee pin, can I get a replacement?

YES, you absolutely can! Please send your replacement request to DAISY.Awards@nuh.nhs.uk with your work address and we’ll send this out immediately.

Please note that this is only available for Daisy single, multi and platinum nomination pins, not honouree pins.

If you have any additional queries or requests not mentioned above, please do not hesitate to contact the DAISY team via DAISY.Awards@nuh.nhs.uk 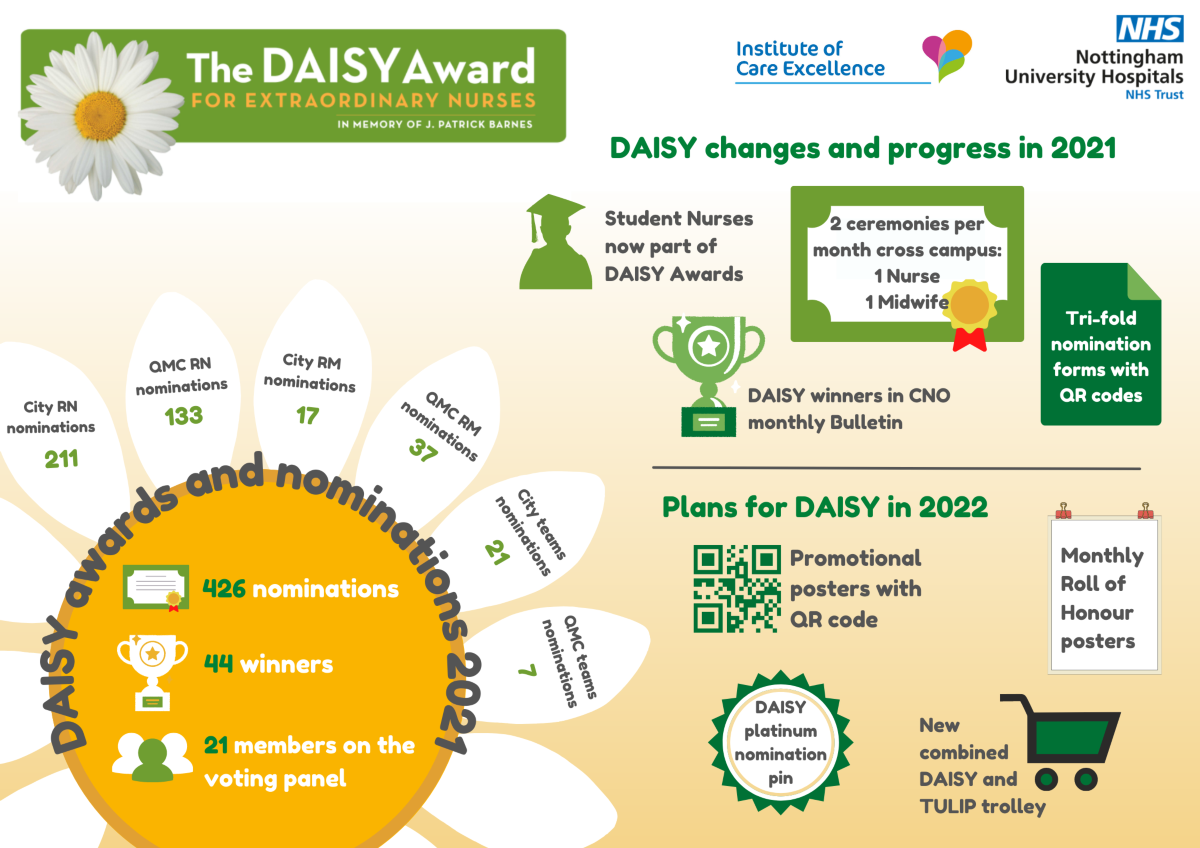