The centre offers self directed learning sessions on an endoscopy simulator and also provide sessions using the laparoscopic trainers and equipment.

The room is generally open from 8am to 4pm but is used for course so can be closed some days, and availability is on a first come basis. The room can be booked to guarantee your spot and kit you require; as technicians are not always available to set up kit.

These sessions are designed to allow individuals the opportunity to practice specific skills and procedures. Although teaching is not provided, it is expected that individuals will work through a series of exercises identified by him/herself and a clinical supervisor tutor.

Modules include patient history, indications and contraindications and have 3D interactive anatomical models and tutorials. Post simulation case review and procedural review data can be stored on your personal user database. Includes didactic content to aid and deepen understanding.

The laparoscopic trainer includes a body torso simulator, cameras, light source and instruments and can be set up to support practice in a range of surgical techniques.

Our laparoscopy simulator provides an ideal opportunity to practise the basic laparoscopic skills using genuine instruments, camera and telescope with an excellent monitor, as used on accredited courses. This laparoscopy simulator is a valuable tool for improving suturing, cutting, grasping, manipulation, orientation and depth perception skills and managing first second and third paradox.

Models available to all NUH staff

we do have some sutures in stock which can be used. Please supply your own sutures if there is a specific type you require.

Risk-free training in a realistic environment 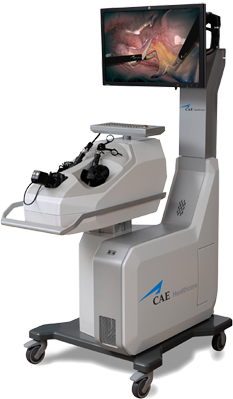 With the LapVR, learners are immersed in the most realistic skills training environment available. LapVR gives learners the opportunity to develop proficiency in techniques such as suturing, knot tying and loop litigation as well as some frequently performed laparoscopic surgeries like gall bladder removal and tubal occlusion for risk-free learning before they touch their first patient. The superior force feedback provides accurate tactile, visual and audio responses to mimic the feel of real procedures.

From essential skills to advanced procedures

The LapVR takes learners through three comprehensive modules that begin with a hands-on introduction to basic laparoscopic techniques. The essential skills modules help learners develop visual-spatial dexterity with both dominant and non-dominant hands, similar to the Fundamentals of Laproscopic Surgery Program (FLS) developed by SAGES. Learners may build upon their essential skills training with more complex procedures and surgeries, including the laparoscopic cholecystectomy and bilateral tubal occlusion.

LapVR features an advanced modular curriculum derived from actual patient data. Unlike other simulators, LapVR permits the upload of supplemental multimedia content to enrich the learner’s experience. The simulator supports setup for individuals or groups, and easy course planning.

Administrators may easily customize case parameters to match each learner’s performance level. At the conclusion of each case, learners are debriefed with evidence-based metrics and outcome measurements. The recorded metrics and post-case debriefing provide analytical feedback for continuous trainee development.

With a manikin, mock ultrasound transducer and graphic representation of both the patient anatomy and the ultrasound scan in real-time; VIMEDIX offers an immersive ultrasound simulation learning environment that shortens the path to competency. The VIMEDIX manikin’s realistic tactile features, including a depressible abdomen, ribs and sternum allow the student to practice fine motor skills associated with performing cardiac ultrasound exams.

As the learner scans the manikin, the VIMEDIX high-resolution monitor displays a realistic simulated ultrasound image beside a real-time 3D graphic representation of the anatomy, including surrounding structures and organs. The 3D anatomy feature can be toggled on or off, or it can be customised to adapt to the learner’s level of knowledge and ultrasound imaging skill. This augmented reality feature improves understanding of how the heart works and speeds the path to proficiency in obtaining ultrasound images. As a learner progresses, the instructor may turn off the 360-degree anatomical image and transform the echo simulator into an ultrasound imaging system that more closely resembles what a resident would find in a clinical setting.

Now you can customise your screen based on your user preferences and learning objectives. Beginners may view only the 3D anatomy within a semi-transparent ultrasound beam, while advanced practitioners may choose a full screen imaging mode and a more challenging ultrasound display. The new biplane imaging mode, which is used primarily for viewing the heart, displays images captured from two ultrasound beams simultaneously. Smart metrics capture more learner movements and can display several captured target cut planes in a series. Instructors can view a side-by-side comparison of the target vs. captured images for learner assessment at-a-glance.