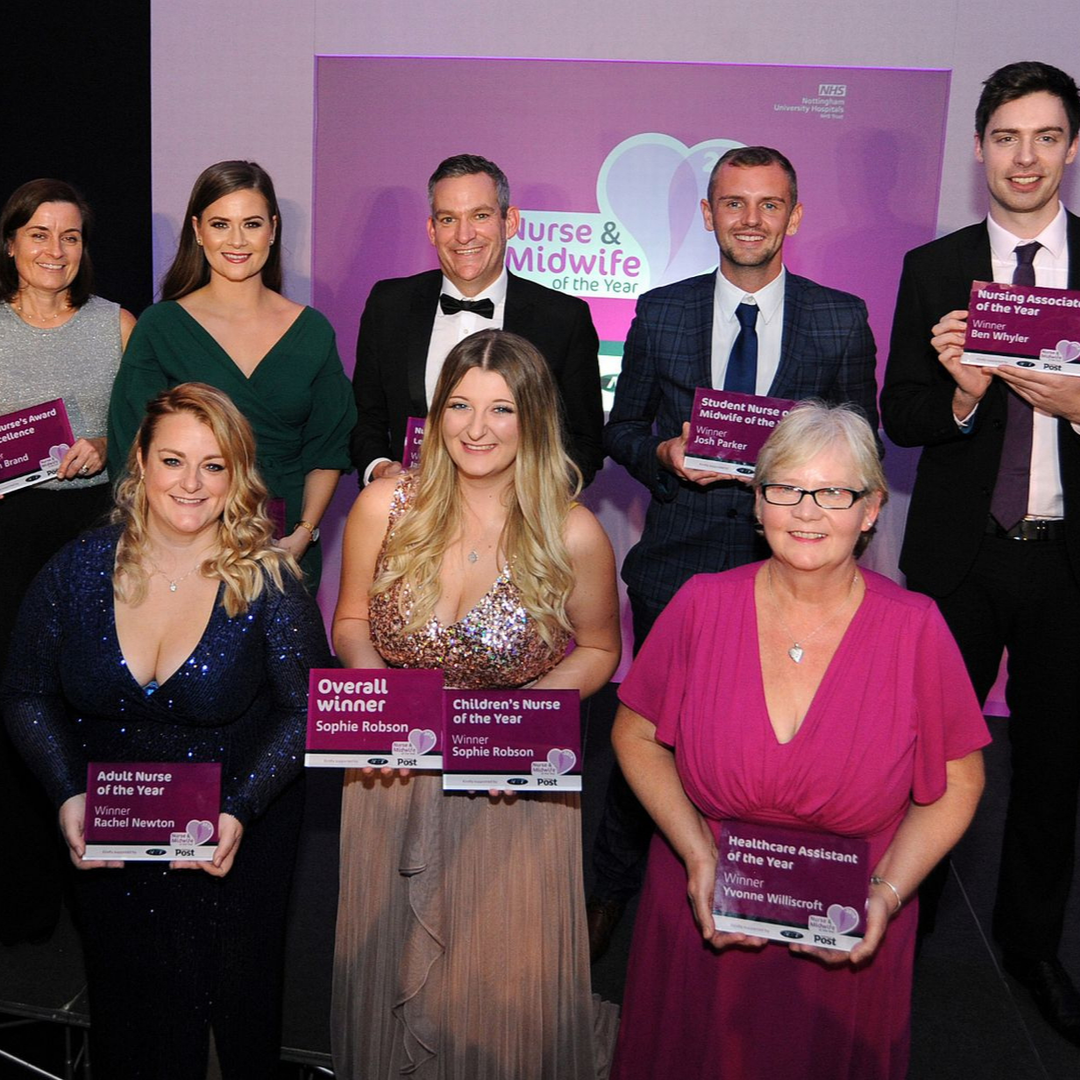 NUH this evening celebrated the annual Nurse and Midwife of the Year (NAMY) Awards, held in partnership with Nottingham Express Transit (NET) and the Nottingham Post.

More than 300 nominations for the awards were received from patients, relatives and colleagues for this year’s awards for nurses, midwives, healthcare assistants and nursing associates working across Queen’s Medical Centre, Nottingham City Hospital, Ropewalk House, as well as in the community.

The shortlisted candidates enjoyed a special ceremony held at Crowne Plaza in Nottingham’s City Centre to celebrate their successes.

Sophie Robson, a Nurse in the Assessment Unit of the Nottingham Children’s Hospital was named the overall winner on the night. Sophie, who also achieved the Children’s Nurse of the Year accolade, was given a glowing nomination by the mother of one of her patients and received the highest number of public votes.

Sophie, as the overall winner of this year’s awards, will also get the honour of having a Nottingham tram named after her for 12 months, following a tram naming ceremony later this year.

“We look forward to welcoming Sophie to the NET depot to see her name unveiled on the side of a tram, a high-profile symbol of the city’s appreciation of the dedication and professionalism shown by all our nursing professionals.”

Sophie was one of nine winners on the night. The full list of winners is below:

Nursing Associate of the Year

Adult Nurse of the Year

Midwife of the Year

Children’s Nurse of the Year

Student Nurse or Midwife of the Year

International Nurse or Midwife of the Year

Healthcare Assistant of the Year

Nurse or Midwife Leader of the Year

Mike Sassi, Editor of the Nottingham Post and Nottinghamshire Live, said: "Once again, it has been an absolute pleasure and a privilege to work with NUH to help highlight the fantastic work done by NHS staff in and around Nottingham. Their efforts and their achievements are appreciated both by their patients and by everyone who loves this city. We are all proud of our nurses and midwives."

NUH’s Chief Nurse, Mandie Sunderland, said: “Many congratulations to everyone nominated for this year’s awards. It’s been an honour to share an evening with the shining stars of nursing and midwifery at our organisation and I’m so pleased that so many of our staff have been rewarded for their contributions here tonight.

“The nominations received this year were inspirational and I’m so pleased that so many of our staff have been recognised for going the extra mile for their patients and colleagues. Congratulations to all the winners. We have some of the best nurses and midwives in the world working here at NUH who continually strive for care excellence for patients and their families.”