The third episode focused on how our managers and clinical teams worked together to manage when routine operations had to be cancelled in January, as the demand for emergency care increased in our busiest ever winter. It also showed surgeons fighting to do the best for their patients.

Catch up on the story of our leading maxillofacial consultant surgeon, Dilip Srinivasan, as he and his colleagues carried out ground-breaking reconstructive surgery. The procedure aims to grow a new jaw inside a specially constructed frame. This surgery will transform Val’s life after earlier treatment for mouth cancer left her unable to speak or eat. Dilip was determined to do everything he could for Val.

She is someone who is suffering. And if medicine is not about treating people who are suffering, then what is it about?

Meet the team from Episode 3 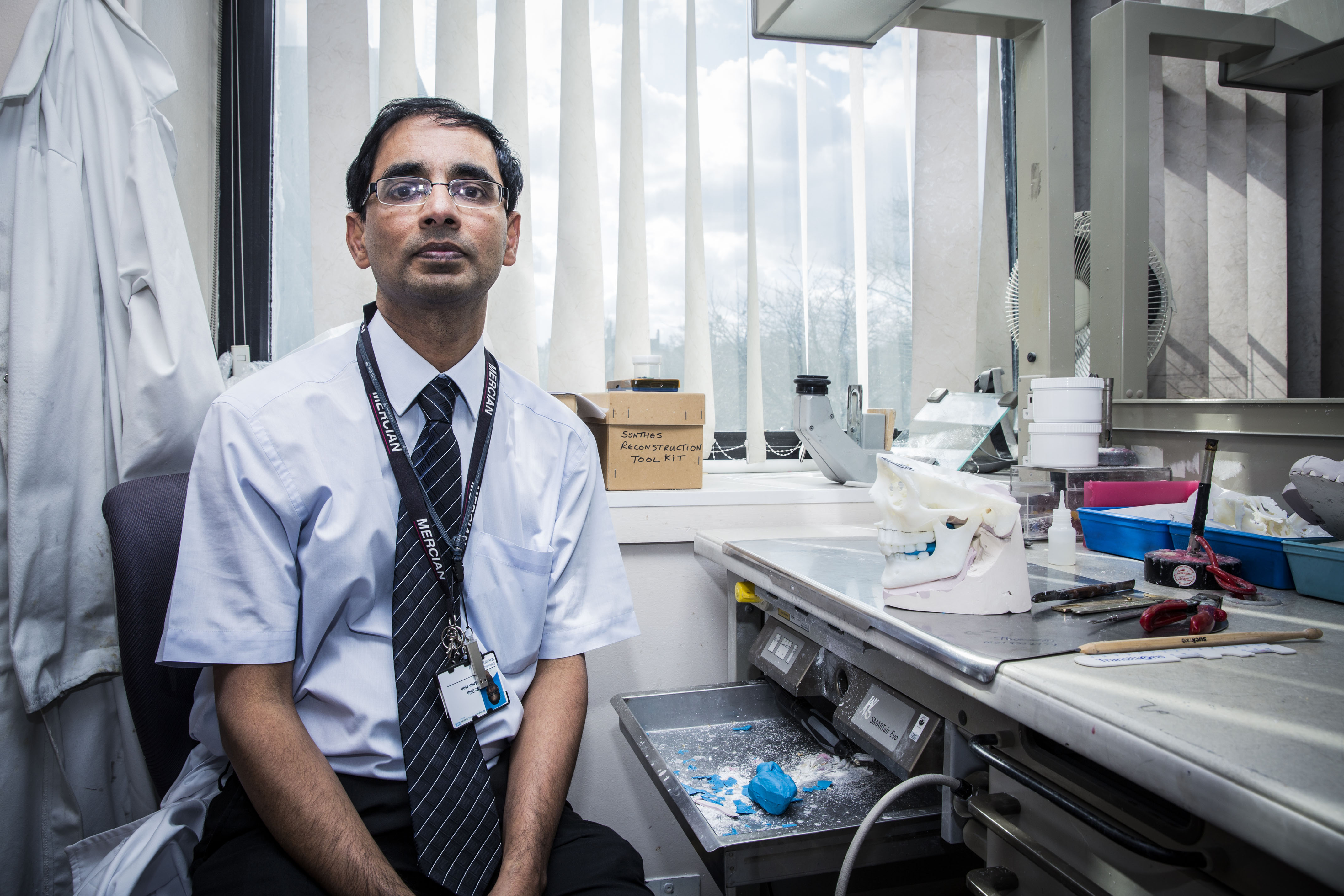 Dilip is Clinical Director for the Maxillofacial department at NUH and one of the UK’s leading surgeons.

With his colleagues in the Maxillofacial department he has pioneered innovative techniques including the use of 3-D printing to reconstruct a patient’s face following major trauma.

Episode Three shows Dilip and the team at NUH, once again using ground-breaking surgical techniques, never used before in the UK, to reconstruct the jaw of a patient after cancer. If successful, this could pave the way for further development of surgical treatments for patients needing replacement of the whole jaw.

Nottingham is recognised as a national centre of excellence for Maxillofacial surgery.  NUH also contributes significantly to world-leading research and innovation, so that many more patients can benefit from the advances in surgical and prosthetic techniques first developed here in Nottingham. The Oral and Maxillofacial Department provides a comprehensive service and includes a state-of-the-art laboratory, which supports the type of surgery that is shown in Episode Three.

55-year-old Val is one such patient. Her entire jaw was destroyed by mouth cancer several years earlier. She cannot eat or talk.

Dilip Srinivasan is due to operate on Val.  He is planning to carry out ground-breaking reconstructive surgery which will aim to grow Val a new jaw inside a specially constructed frame.  This has never been done before in the UK and brings together a number of techniques and specialist knowledge from the surgeons and the laboratory.

This surgery will transform Val’s life but with the pressure on hospital beds caused by the increase in emergency admissions over the winter, the surgery may not go ahead.

Dilip is determined to do everything he can to fight for Val’s operation. 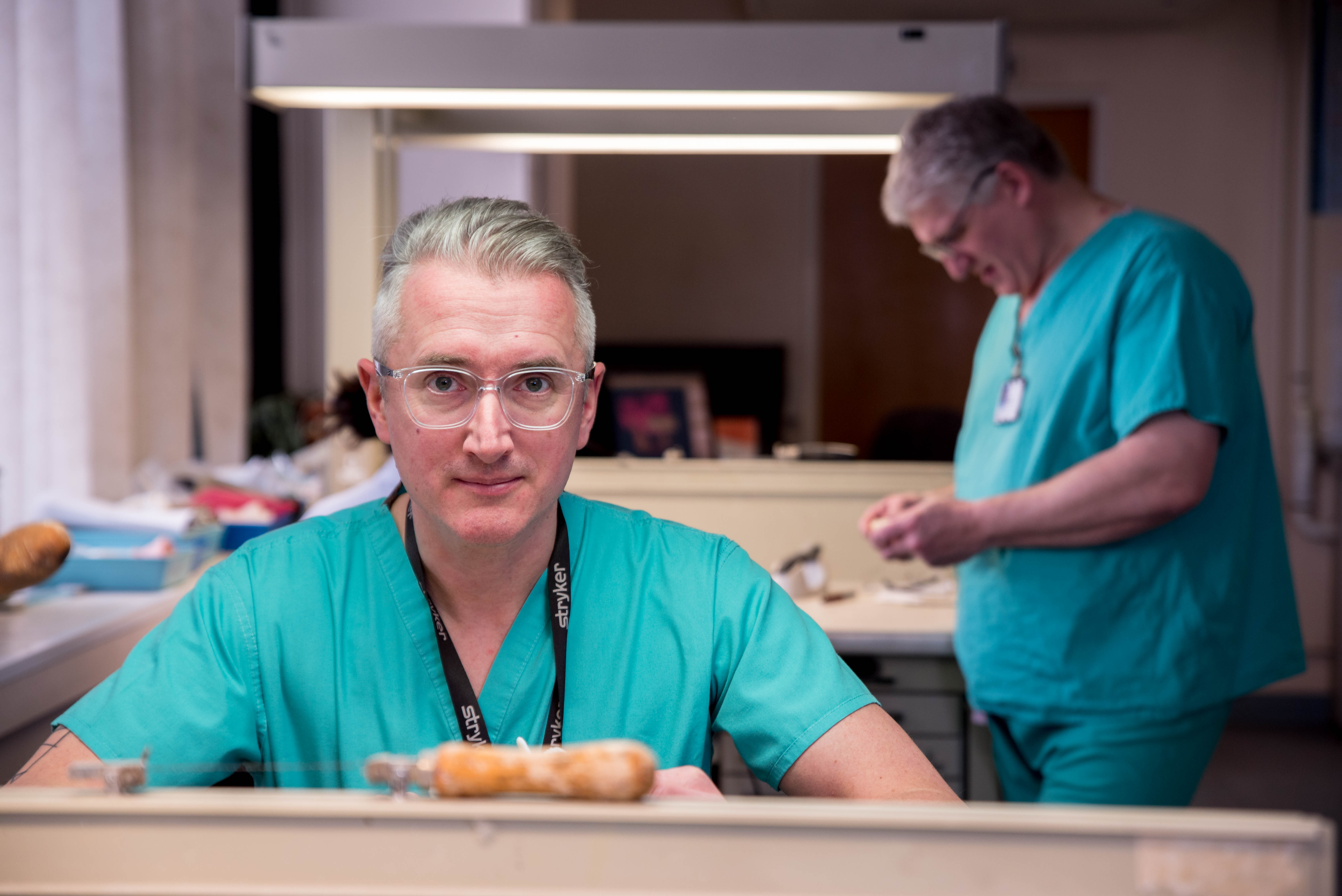 Jason is a Consultant Maxillofacial Prosthetist who has worked at NUH since 2002.

He is part of the team who has brought their expertise to create a national centre of excellence for reconstructive surgery. He has developed the Maxillofacial Laboratory at NUH, which is recognised as one of the best in the country. They were the first hospital laboratory in the UK to embrace 3D printing in-house and the first unit to establish 3D scanning and 3D photography into their everyday practice.

He was awarded the National SMILE award for Maxillofacial Reconstruction in 2009 and the Department of Health Chief Scientific Officers Award for leadership in 2010. He has published articles in scientific journals on 3D printing and additive layer manufacture in the fields of trauma, oncology, facial prosthetics and craniofacial surgical planning.

Working as part of the team in Maxillofacial, prosthetics is an important part of enabling patients to restore the appearance and function of their head, mouth or neck after a traumatic injury, diseases such as cancer or genetic conditions.

Jason is part of the surgical team that is reconstructing Val’s jaw, after mouth cancer resulted in most of her jaw being removed.

He works with Maxillofacial consultant surgeon Dilip Srinvasin on the ground-breaking surgery that will grow a new jaw for Val and transform her life.

Valerie’s case is interesting because distraction osteogenesis is not new. It comes from leg lengthening originally. So that kind of surgery had been done for a hundred years.

We’ve done distraction before.  We’ve done a half jaw on numerous occasions on both sides but we’ve never done a full jaw. That’s meant we’ve had to come up with a very innovative solution to do that, a one off. 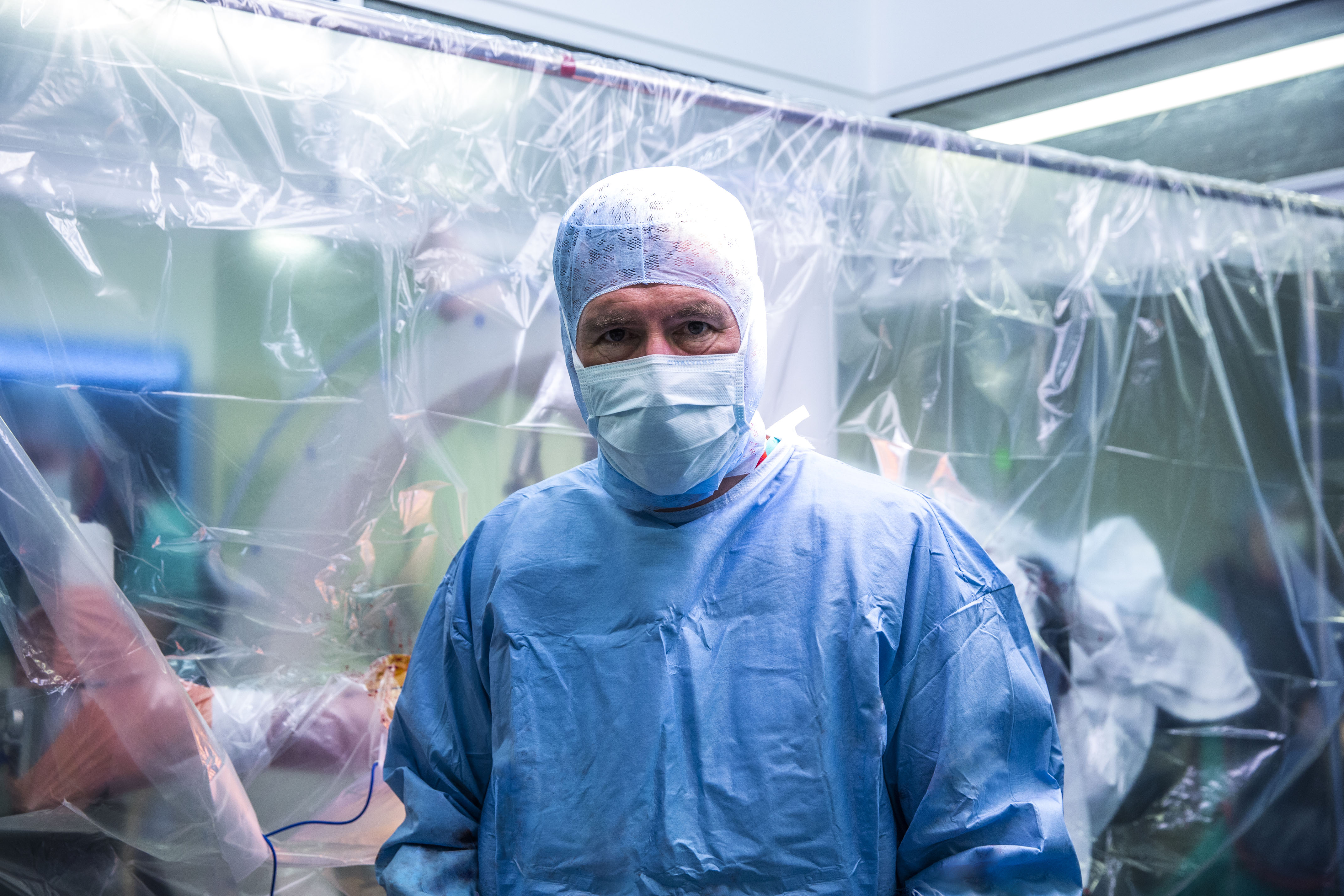 Tony is a consultant hip and knee surgeon who trained in Nottingham. He is now one of the leading surgeons working as part of the Orthopaedic team as well as working as one of the trauma surgeon in the East Midlands Major Trauma Centre based at QMC. As a keen sportsman himself, Tony also treats sporting injuries.

NUH carries out the highest volume of orthopaedic surgery in the region and performs over 1,800 joint replacements a year, including hip, knee shoulder and ankle replacements.

We offer a wide variety of routine and complex orthopaedic procedures for joint and soft tissue pain in specially-designed, state-of-the-art orthopaedic operating theatres.

In January and February, most routine surgery was cancelled, due to the pressures of NUH services from emergency patients. As a result Tony has had most of his routine surgical list cancelled.

Currently in hospital, terminally ill Peter needs a hip replacement so that he can be pain-free and have a better quality of life. Tony believes there are exceptional circumstances in Peter’s case and does what he can to get his surgery through.

So Peter was admitted because of his lung cancer. Cancer spread to different areas of his body. He was in absolute agony. So he’s in a hospital bed. We’ve still got our theatre facilities and we’ve still got surgeon availability to do operations.

You can watch episode 3 here.

Stories behind the episode

Meet Jason Watson, one of the stars of BBC's Two's Hospital documentary

Jason described some of the work he is involved in as a Prosthetist Consultant.