Every month, over 1400 patients are referred to NUH with symptoms that may be cancer. As a specialist centre, NUH treats patients from across the region

Nationally there are standards for the amount of time for patients should wait to be seen and treated after a referral. Performance against these standards is improving at NUH and this episode explored relationships between clinicians and managers in managing cancer waiting times and subsequently the impact on patients and their families.

We met patients of all ages undergoing surgery for cancer. Beyond surgery we also learnt of the impact that an international clinical research study could have for 4-year-old Poppy, who had a brain tumour.

Freda, a 75-year-old retired teacher, had a lump in her thyroid gland that might be cancer and requires an operation.

70-year-old Margaret had a 6kg tumour in her stomach – a rare form of cancer known as Sarcoma. She was referred to NUH – a regional centre of expertise in this type of cancer. Colorectal surgeon Alistair Simpson believes he could save her life but the complexity of her condition makes this a high risk procedure.

Meet the team from Episode 2 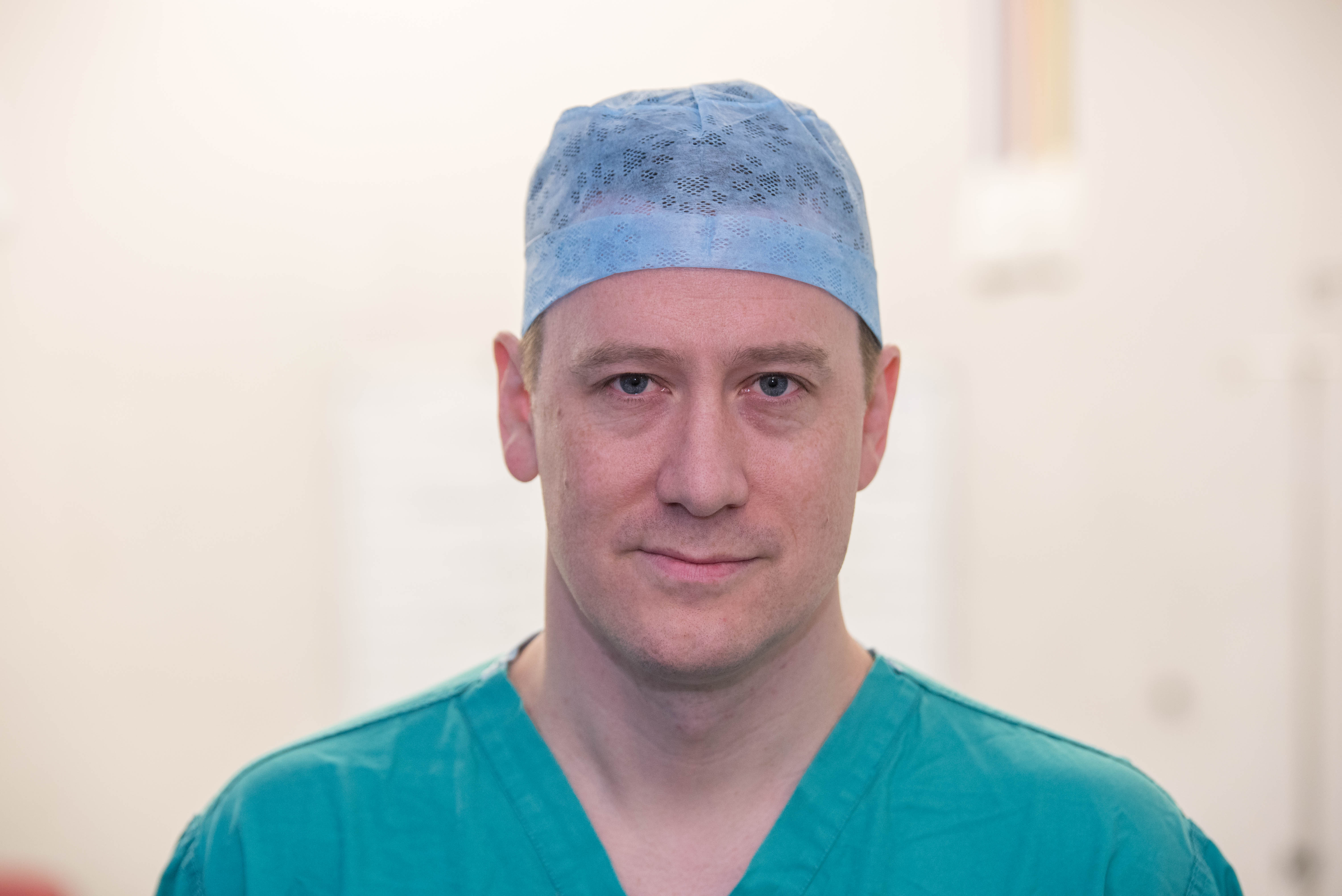 Alastair has been a consultant surgeon at NUH since 2016 and his areas of expertise include advanced colorectal malignancy, bowel cancer, laparoscopic surgery, robotic surgery and sacral nerve stimulation.

70-year-old Margaret has a 6kg tumour in her stomach – a rare form of cancer known as sarcoma. She’s been referred to NUH – a regional centre of expertise in this type of cancer and is now hoping that the team in Nottingham can help her.

Alastair believes he can save her life but the complexity of her condition means it is a very high-risk procedure.  He explains:

Sarcoma is quite a rare tumour – it’s a tumour of the connective tissue, so the tissue that sits between the organs. And because it occurs in the abdomen there a lot of potential space, that gives that tumour opportunity to grow. 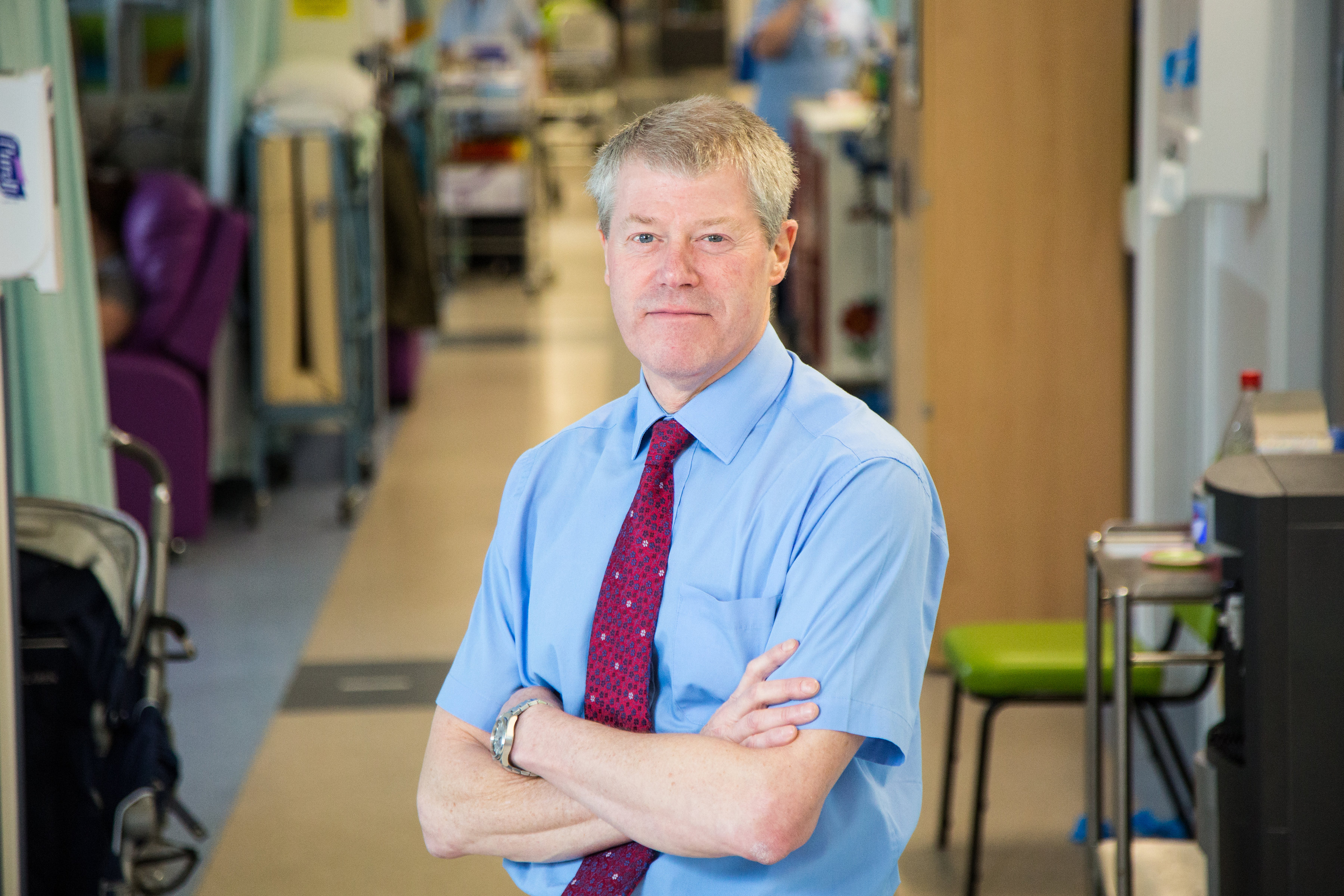 Richard is Professor of Paediatric Neuro-oncology and Cancer Biology at the University ofNottingham; he heads up the Children’s Brain Tumour Research centre, based at the QMC. He is a leading researcher into children’s brain cancer and wants to better understand the underlying biology of brain tumours in children and young adults as an important step in helping to improve the outlook for patients and cure these diseases.

Professor Grundy says of the research trail featured in Episode Two of Hospital:

The study will improve our overall understanding of the biology of this disease while providing evidence for which groups of patients and treatments have the best outcomes and how best to treat this complex disease in the future.

In the future this will allow us to develop more tailored treatment plans based on patients’ age and diagnosis to give them the best chance of beating this aggressive disease while reducing the long-term impact that treatments may have on their lives.

Four-year-old Poppy is recovering from emergency surgery for a tumour on her brain. She must now have several months of further treatment. Professor Richard Grundy is Poppy’s consultant and offers to put her on a clinical trial involving an innovative treatment.

Poppy’s parents are now faced with a difficult choice: to stick to the standard treatment or to go onto a clinical trial with its unknown results.

Our Head and Neck Cancer Service includes a range of different health professionals from pathology, radiology, dental surgery, speech and language therapy, dietetics and senior nurses, as well as Ear, Nose and Throat (ENT) and Maxillofacial surgeons, involved in the diagnosis and treatment of head and neck cancer.

Episode Two of Hospital featured some of the challenges facing the ENT head and neck cancer surgeons, which is one part of the team that makes up our full Head and Neck Cancer Service. The full service includes specialist cancer surgeons from Oral and Maxillofacial as part of the wider multi-disciplinary team. The service is continuing to see and treat patients as usual and NUH is recruiting additional ENT consultants to support the Head and Neck Cancer Service.

If you would like to know more about our Head and Neck Services at NUH, then please visit the Nottinghamshire Head and Neck Cancer Service website.

You can watch episode 2 here.

Stories behind the episode

Episode two of BBC Two’s Hospital showed the story of Poppy McGill, a brave little girl who had experimental treatment for a brain tumour.